The Truth About Using Algaecide In Your Pool.

When you see cloudiness and greenness in your pool water, you might become instantly horrified. You’ll probably blame yourself for messing up the water chemistry or not paying enough attention to it. No pool owner is perfect, and things like this tend to happen sooner or later.

Algae is the reason for your discolored pool. Many people will tell you to purchase some algaecide and apply it to the water. This pool chemical is supposed to destroy algae in its tracks. But is it really a good thing to use in your pool water for killing algae? No, not really.

Algaecide might sound like an algae killer, but it is actually better used as a preventive treatment than a killing treatment. That doesn’t mean you can’t use it as an algae treatment because you can.

Most algaecides come from copper, such as copper chelates or copper sulfate. Each chemical compound has a central metallic atom. Some other algaecides use sodium carbonate peroxyhydrate or herbicide endothall.

When algae are exposed to these chemicals, their cellular processes are disturbed. Researchers don’t even understand why this happens. One belief is that these chemicals interfere with the transportation of energy and division between the cells. Another belief is the chemicals stop new cell proteins form synthesizing, causing the algae cells to die.

No one really understands how algaecides function. Just know that if there is a lot of metal content in the area where you live and your pool contains water with metal in it, then there is a huge oxidation risk that can result in stains on the pool walls. So, you’ll make this problem worse by adding copper-based algaecide to your pool.

That is why you’ll want to use copper-free algaecide instead. This will keep your pool surfaces safe and protected.

There are literally tens of thousands of algae in existence. Most of us only come across a few of them. The average algae that we come across are not severely toxic, unlike the deadly “red tide” algae which are dangerous to all mammals.

Algae are classified as protists, which are described by biologists as any cell containing a nucleus that is not a fungus, plant, or animal. Since algae don’t belong to any particular natural group, this is the best category for them to be in.

Fortunately, we know how to identify, eliminate, and prevent the common algae that we do come across, especially in our pools.

Here are the four common algae types found in pools:

Most pool owners will see this type of algae at some point. If you’ve ever swam in the lake and neglected to wash your clothes afterward, then you’ve probably seen green algae.

This alga is not as common, but it can show up and stubbornly stick around.

You will have the most difficulty eliminating black algae.

Has a slimy look which makes it appear to be algae, but it is actually bacteria. 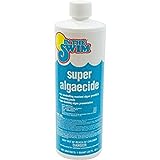 In The Swim Super Pool Algaecide - 1 Quart
Buy on Amazon

The Best Way to Fight Algae

If you want to eliminate algae effectively, then it is better to use chlorine than algaecide. Whenever you have cloudy water or slimy walls in your pool, chlorine is your best weapon against it.

Chlorine is formulated to oxidize one cell algae and bacteria. In other words, electrons get traded between them. This causes the cell walls of the algae to fall apart. As a result, their most precious nutrients are lost. Algae cannot grow any further if they lose these nutrients.

All you need to concern yourself with is sustaining the water chemistry in your pool. Chlorine should be at 3 ppm (parts per million), bromine between 3 and 5 ppm, biguanide between 30 and 50 ppm (if applicable), and your pH levels need to be balanced too.

When something from the outside infects your pool, this will force you to shock your pool regularly and scrub the walls aggressively. If you want this process to move along quickly, you can use an algaecide to help you out. But it won’t do everything to eliminate algae. It only helps.

Sometimes there are algae which are resistant to chlorine, such as black algae and mustard algae. In these cases, algaecide is all you can depend on. However, it is still recommended that you use chlorine sanitizers anyway in addition to the algaecide.

The first way to prevent algae is to test your pool water and ensure that its chemistry is balanced. The second way is to prevent any contaminants from the outside from getting into your pool.

That doesn’t just mean throwing a cover over your pool when you’re not using it. If you’re wearing clothes which have previously been exposed to ocean water, river water, or lake water, then you must wash those clothes prior to going into the pool.

As for pool toys, they must be sanitized and cleaned prior to placing them in the pool water. A bleach-based solution is best to use for cleaning them.

If you normally swim in a natural body of water, then try using algaecide more regularly in the water as a precaution. On sunny days, adding some algaecide to the water early in the day could stop the algae from blooming so much.

When you purchase an algaecide product, you’ll see instructions on the packaging which tell you how to use it properly.

Protection During the Off-Season

It is very important to protect your pool with algaecide during the seasons when you’re not using it. All those months of not using the pool will make it much easier for algae to spread into it, given the dark and humid nature of the pool. Algaecide must be used to prevent this.

Overall, algaecide is not the main requirement for getting rid of algae. It is always more important to sustain the balance of your water chemistry in order to prevent the growth of algae. Then you’ll want to use chlorine sanitizers to shock your pool and kill the average infestations of algae that will occur. Once you apply the shock treatment, then you can add the algaecide as an extra precaution if you want. But you don’t even need to worry about using algaecide unless you have black algae or mustard algae in your pool.